skip to main | skip to sidebar

Well after being sick for two weeks, we finally went to the doctor and we have H1N1.  Luckily, we have been confined to our house mostly the past few weeks because we didn't want to spread our colds around and now we shouldn't be contagious anymore.  I guess we won't be getting the vaccine after all and hopefully we can start feeling better soon.

Throw them to the lions....or not

I work from home and part of my job is to call and follow up with people who have stopped paying our company their monthly fees.  We used to joke about the late payers that we were "throwing them to the lions" and not giving in.  While tough love is necessary to make sure companies do not get behind I have also realized that being nice makes a world of difference.  (Don't worry, I never used to yell or anyone or anything)  If a company can tell that I am willing to work with them, they are most often willing to pay their dues and move on with life.  Sometimes this creates more work for me; however, I have been more successful collecting what is owed to our company by doing so.  I also don't get yelled at as much....which is a big bonus!

I want the people I speak to and work with to feel like they are people and not something to get off my check list.  Not only that, but I want the people I interact with in daily life to feel the same way.  It is easy to get caught up in daily life, overbook yourselve, and forget to make time to give an extra smile or calm your words down and listen.  You are just as important as I am and there's no reason why I shouldn't treat you how I would like to be treated.

Each day it seems like it has been getting colder and colder!  Winter is definitly on its way!  Now that we are inside more often here is what is keeping us busy.... 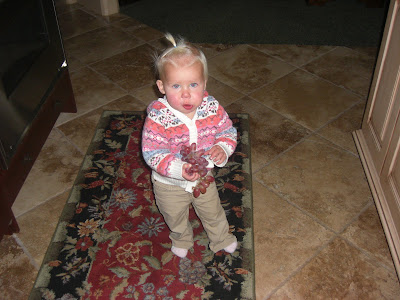 Keeli loves grapes so I try to keep them stocked in our house.  Every time I open the fridge she opens the grape drawer and starts eating them. 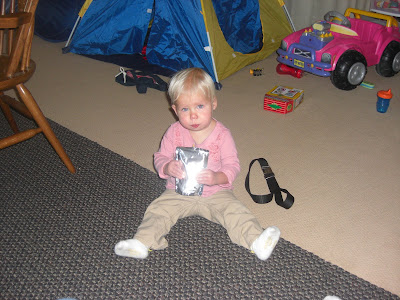 Keeli also loves to to drink water, juice, and anything she can get her hands on.  Her recent favorite is delicious capri suns! 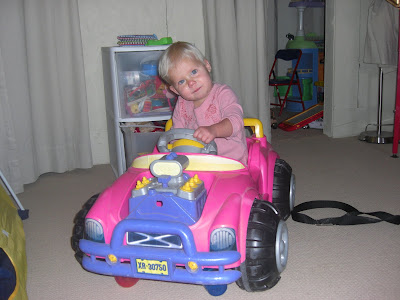 One of Eric's coworkers gave us this little car and Keeli will hardly get out of it!  She packs in her purse, cell phone, and anything else she can find and is off! 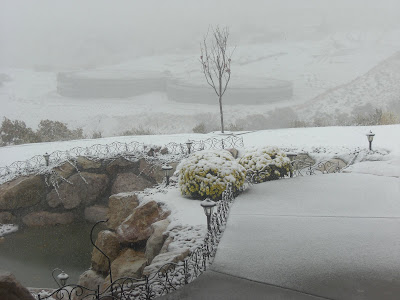 The snow finally came today.  Keeli and I watched the snow fall during lunch....what a view! 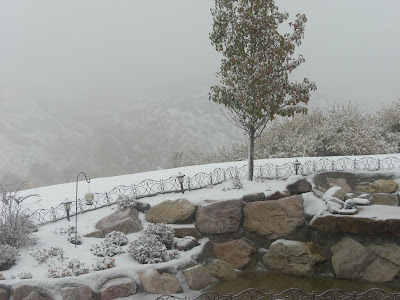 Looking out the backyard. 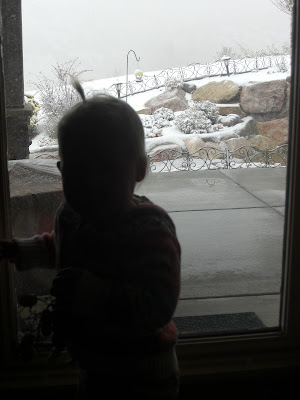 I can't wait to take her out in the snow!  We need to get some snow clothes so we don't freeze!! 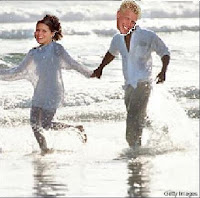 What are your middle names? Anne and Blaine

How long have you been together? We've been married since August 05 baby!

How long did you know each other before you started dating? From November - March

Who asked who out? I asked Eric to come ice skating with a group of us....but he will always say he asked me out first...:)

Whose siblings do you see the most? We see both sides of the family about the same

Do you have any children together? One darling little gal!

What about pets? No....I will probably cave and let Eric get a dog someday though

Did you go to the same school? No, I went to BYU and he went to the U and UVU

Who is the most sensitive? haha....I think that would be me

Where do you eat out most as a couple? We like to try different places....we used to go to Los Hermanos all the time but now we live farther away from it

Where is the furthest you have ever traveled as a couple? To the East coast

Who has the worst temper? We have never had a fight before.  :)  No, we are both pretty mellow

Who does the cooking? I cook and Eric does the dishes

Who is more social? Eric...I can be a little shy

Who is the neat freak? I think that is a tye...we both have our nitpicky things

Who is the most stubborn? We are both stubborn....so when we do fight it is fun!  (it's not really fun)

Who hogs the bed? When it is cold I snuggle up to Eric so I can stay warm

Who has the bigger family? Eric for sure....I still don't know half of his extended family

Do you get flowers often? On special occassions...since I can't eat sugar...Eric usually brings me home delicious treats I have been craving!

Who eats more? Eric....have you seen him, he is double the size of me!!

Who sings better? We have choir voices!

Who does the laundry? I do most of the time, but Eric always helps when he is home

Who is better with the computer? I am but Eric is catching up!

Who drives when you are together? I have been lately....just depends on the day

Who picks where you go to dinner? haha....we decide together....which sometimes takes forever!!

Who is the first one to admit when they are wrong? We both usually get sick of fighting at the same time and realize that we are fighting over a silly thing

Who wears the pants in this relationship? We both do....we would be cold without pants!

Who eats more sweets? Eric does, but that's just because I can't

Who cries more? Me, Eric hasn't cried since he was 10

What's your best day together? Day of the week? Day of our lives? Just when we can relax and enjoy each other's company without the sresses of life

Where did you honeymoon? We went on a cruise to Mexico

Favorite date night? Depends....we love to watch movies, but we also love to be outdoors

Favorite TV show to watch together? So you think you can dance!!!

Couple I imagine us growing old like? We are going to be cute cuddly old people

I tag whoever wants to do this...

What do you think...is the vaccine worth it?  I can't decide.

If you need any delicious fall treats to try, joyofbaking.com is the place for you.  I tried their pumpkin bread last week and can't wait to try their chocolate cheesecake, pumpkin cheesecake, and candy corn parfaits.  Most of the recipes are fairly easy and use ingredients you already have around the house. 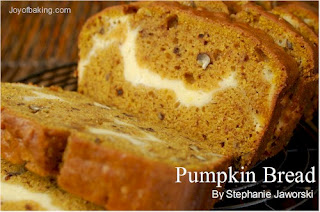 Eric made a bet with one of his buddies this weekend that they were going to work out 5 days a week together.  The first person to skip out on a day has to take the other couple out to the Melting Pot.  I think I will be setting my alarm to make sure Eric gets out of bed on time!!!  I am proud of them for setting the goal and am very interested to see what happens...I am going to kickboxing tonight so I can keep up with my man!  :)

I finally got my Puma Pants

Since high school I have wanted puma pants but could never find any...finally after years of searching I got some at the Puma outlet in Myrtle Beach.  Yes, ladies and gentlemen, they are all that I wanted and more.  I am in heaven.

I do not want to be eternally cold

I am sitting here with my snowboard jacket, snowboard socks, and down blanket and I am still cold. During the winter my wedding ring doesn't fit..if I shake my hand too hard it flies off...it flew off in a snowy parking lot last year and I almost had a heart attack. I would be wearing mittens but then I couldn't type.

Does anyone know how to stay warm during winter? 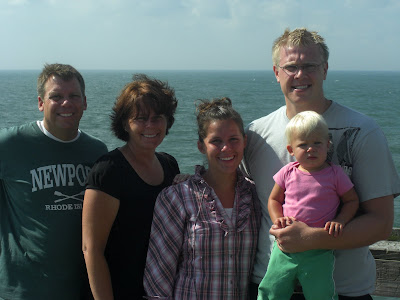 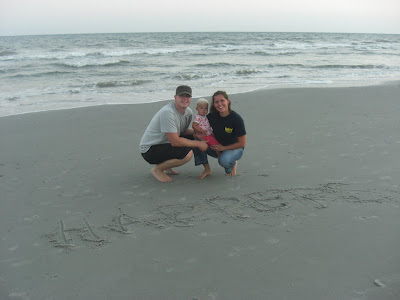 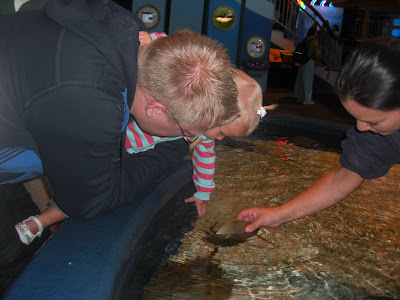 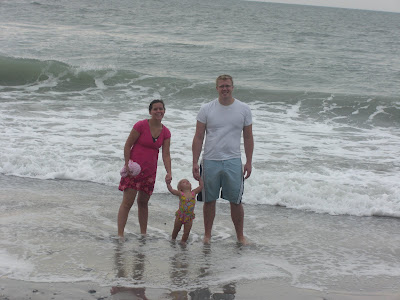 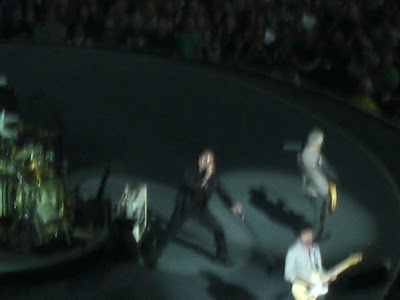 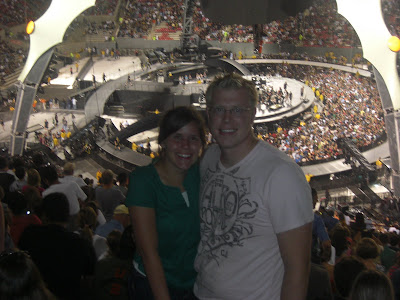 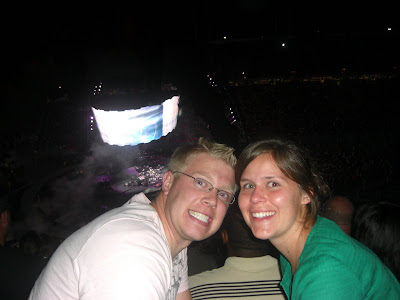 That's right ladies and gents....I am a 100% converted U2 fan. I surprised Eric with U2 tickets as an early birthday present. They were in Raleigh the same time we were in Myrtle Beach so it worked out perfectly! Eric was definitely surprised to say the least! It was an amazing concert and we rocked the night away!